We had the good fortune of connecting with Wendy Lee Gadzuk and we’ve shared our conversation below.

Hi Wendy Lee, what is the most important factor behind your success?
I think the most important factor behind what could be considered my success is perseverance. Staying true to a vision. Doing the footwork on a daily basis, even when I don’t feel like it, even if it’s just one small thing. Reaching out to people, and responding when people reach out to me, and never neglecting that. Letting the discouragement wash over me, and then letting it go. It happens. Rejection never feels good, but it’s part of the process. We have to keep going in spite of it. Also learning how to rest, when necessary. Sometimes, all action can result in spinning our wheels. That is not efficient. Recharging is necessary. It’s difficult for me to do, at times, because that is the perfect opportunity to listen to all those voices that are telling me about all the things I’m not doing, but I’m learning to let them be. And I’m learning that it is more important to find a small group of people who appreciate and honor what I do than to have large numbers of “followers.” Not bending my vision to fit in where I think I “should.” Staying true to what is unique about what I do, and realizing that “fitting in” is boring. And accepting that it is an extremely slow process. Hence the perseverence. 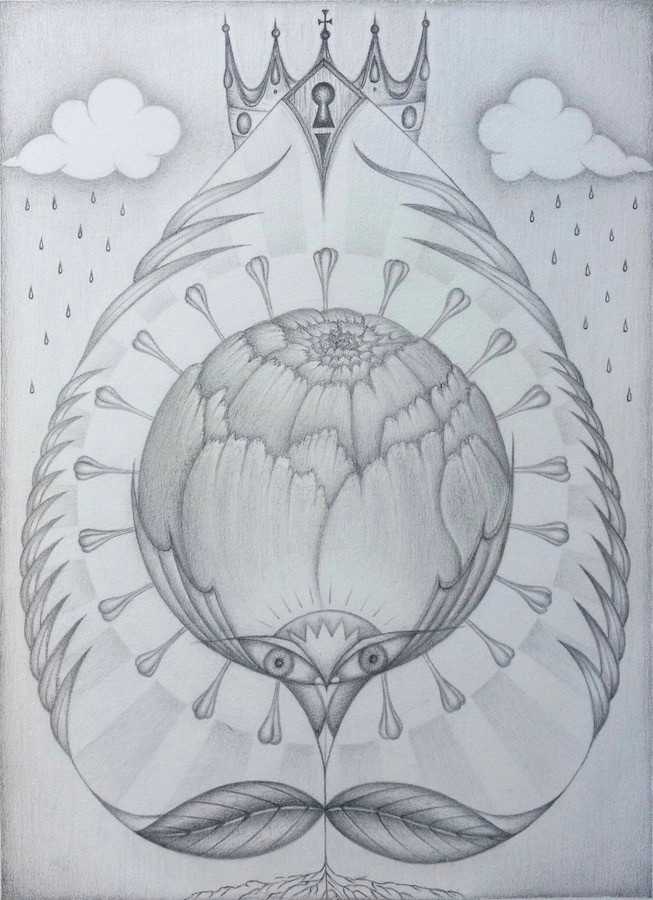 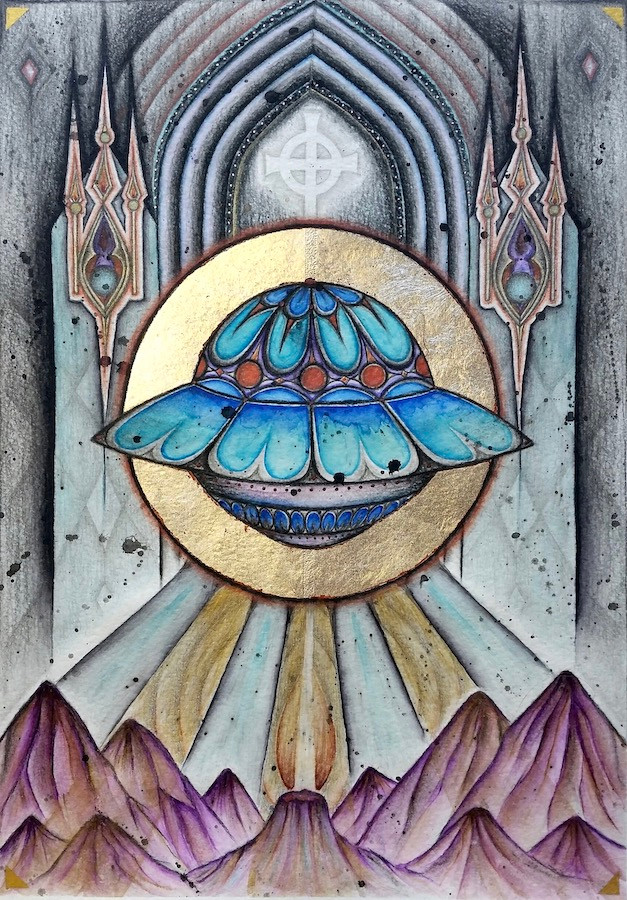 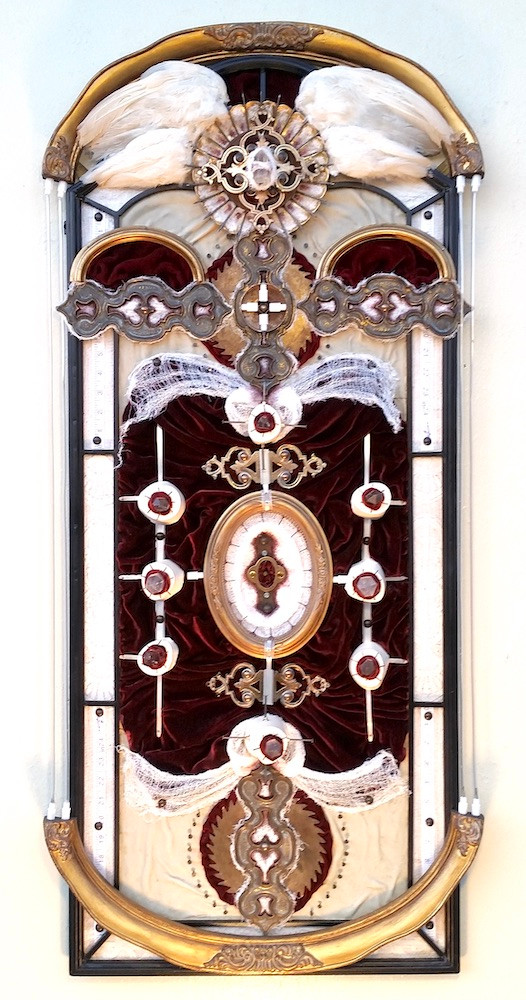 Can you open up a bit about your work and career? We’re big fans and we’d love for our community to learn more about your work.
I am both a visual artist and musician who has constantly struggled with finding a balance between the two. Over the past few years, my focus has been more on visual art, but not completely. My old dirt-psyche swamp-rock band from the Bay Area, Andalusia Rose, recently released some previously recorded music on Bandcamp as a 6-song EP called “She Holds the Fire,” with my art featured on the cover. As far as my visual art goes (and I call it art because it’s the easiest way to describe what I do), I have two different styles of working. I do mixed media assemblages using found objects, old jewelry, bones, vintage metal hardware, doll parts, and whatever else happens to be around to create altar-like pieces that hold space for forgotten spirits. More recently, I’ve done a series using medical waste from my boyfriend Tony’s grisly bout with sepsis. It was cathartic to turn a horrific experience (for us both) into something beautiful. I also do work on paper. This started out as finely detailed ballpoint pen drawings but has evolved into using many mediums such as charcoal, graphite, watercolor, colored pencil, and recently coffee, clay, and pomegranate juice. I took a traditional Byzantine icon writing workshop a couple years ago that was pretty intensive. I learned all the traditional methods of creating icons for worship, using egg tempera, gold leaf, etc. I’ve incorporated some of those techniques into my work – especially the water gilding style of using gold leaf, which is applied over clay bole, which is basically a liquid clay that is painted on and allowed to dry. My work is almost always symmetrical. I get very uncomfortable when I try to move away from symmetry….though it’s natural, imperfect symmetry. Religious and occult imagery are big themes in my work. Last year I created my first oracle deck called Deconstructed Divination. I used sections of my drawings that I isolated and cropped shapes and came up with a whole new visual language derived from a world that already existed. It’s a 44-card deck and it’s available on my website. As I mentioned previously, I’m also part-time curator at La Matadora Gallery in Joshua Tree. I’ve found that to be rewarding work. I enjoy putting together themed group shows as well as showcasing different artists, local or otherwise, whose work I love. It’s a LOT of work, and sometimes I feel like I’m crazy for taking it on, but it always pays off in some way. It’s especially gratifying when someone I’ve given a show to tells me how much it has helped them to have a reason to keep making art. 2020 has also brought me the opportunity to do an album cover for Wino from the Obsessed, St. Vitus, etc. Wino is someone whose music I’ve loved for many years. He recently put out a solo acoustic record on Ripple Music and approached me about doing some art which was my honor. I exhibit regularly at La Matadora as well as several Los Angeles galleries. As far as overcoming challenges, it all goes back to that first question. Perseverance is key. In the words of a wise woman named Camelia Elias, who is a teacher and mentor of mine (and also deserves a shoutout), “Keep going.” That’s it. It’s simple. Not easy, but pretty damn simple. I’m working on an upcoming recording project with my partner Tony Buhagiar under the name Stone Levitation. Stay tuned! 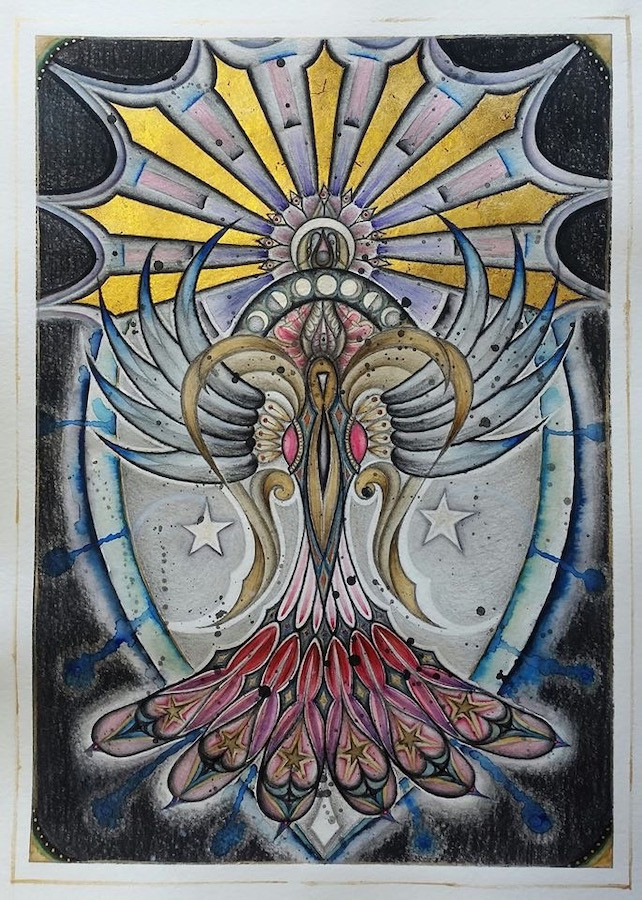 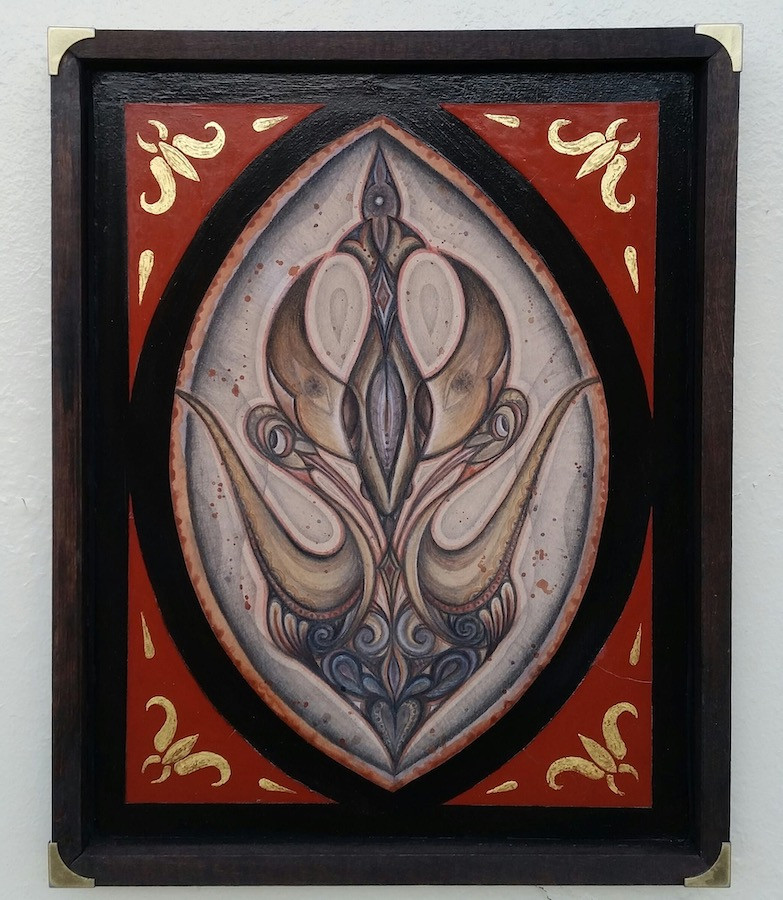 Any places to eat or things to do that you can share with our readers? If they have a friend visiting town, what are some spots they could take them to?
Where would I take someone to show them the best time ever? It’s strange to think along these lines as we’ve been in semi-lockdown on and off for close to a year! That’s crazy, isn’t it? But if things were “normal,” whatever that means, I would of course take them to La Matadora Gallery and all the little surrounding shops, including our neighbor Jeff Hafler’s Beauty Bubble Salon and Museum. Jeff currently has a groovy hair-related installation at SFO (San Francisco Airport). Joshua Tree National Park is nearby, which is stunning at sunset. Noah Purifoy’s Outdoor Desert Art Museum is a must-see, with its degrading and dilapidated installations. Then there’s the Integratron, a dome-shaped building in Landers that offers soothing sound baths, built by George Van Tassel in 1954, who claims to have been partially guided by aliens. Giant Rock is not far from there, which is a massive boulder with a history as a gathering spot for UFO enthusiasts. While we’re up there, Landers Brew is a great place to take in some local music with a down-home feel. If you’re hungry, La Copine is the go-to spot for some delicious bites, in spite of their strange hours. If it’s pie that you want, Boo’s Organic Oven is the place. But really, I’m a bit of a homebody. I’ve got 5 acres and my backyard is a big, beautiful canyon. When I’m not making art, I love sitting outside, watching the meteor showers, listening to the coyotes and the owls, memorizing the constellations that are now visible after decades of living in cities. Come have some tea and hang out with me there. 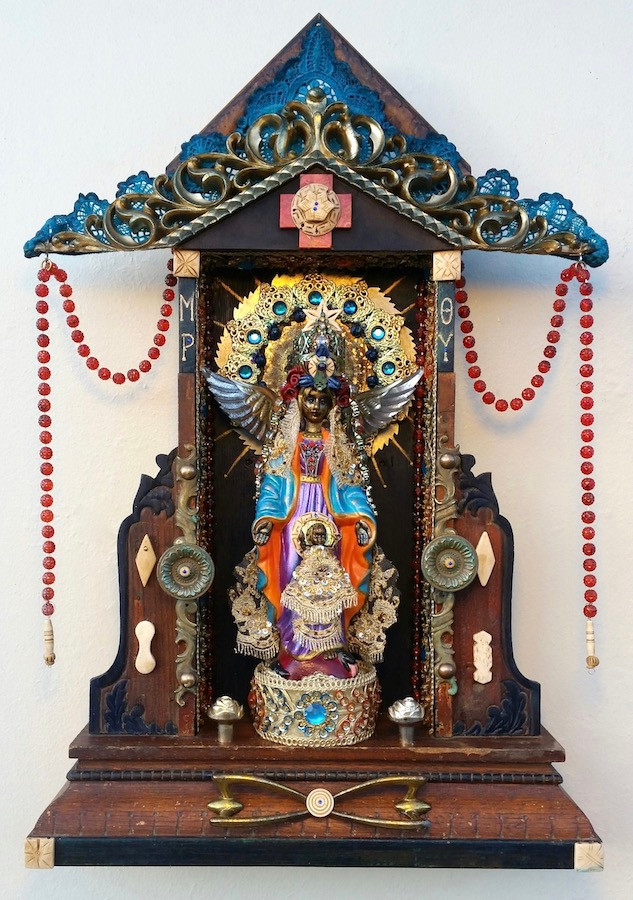 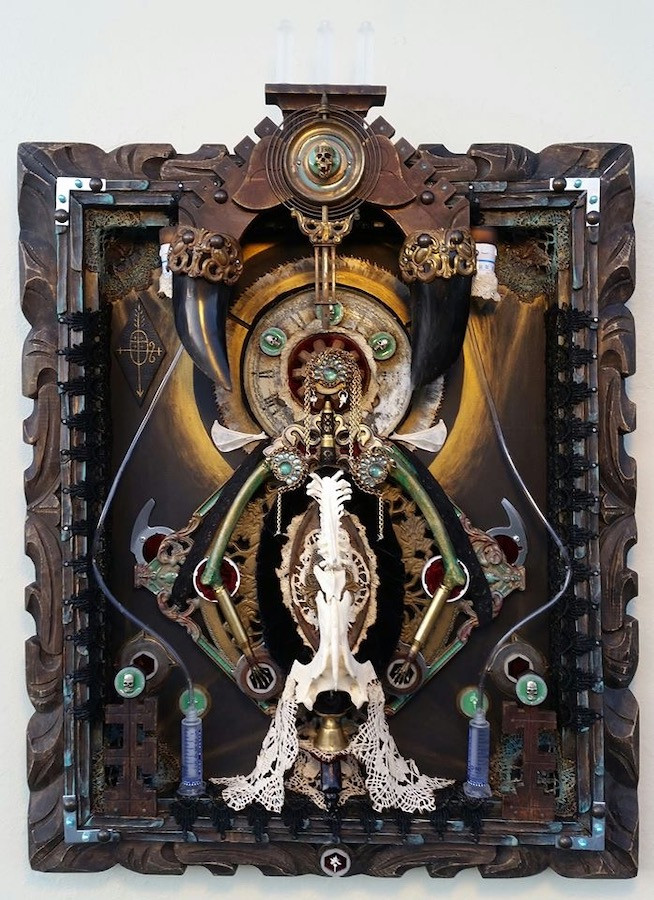 Shoutout is all about shouting out others who you feel deserve additional recognition and exposure. Who would you like to shoutout?
First of all, I would like to recognize my wonderful partner, Tony Buhagiar. I couldn’t ask for a better person to quarantine with. In addition to being my companion, he is also an amazingly wacky visual artist and ripping guitar player/riff writer. I’m hoping to get a book out of him soon. His support of everything I do is precious. Another shoutout goes to my good friend and partner at La Matadora Gallery in Joshua Tree, where I am part-time curator, Colleena Hake. Colleena is the gallery owner and a killer mosaic and performance artist, who recently has been doing a series of beneditos/cabin blessings with wrought iron trivets that each include a special artful poem. It should be noted that both of these people who are quite dear to me live with what are considered disabilities – Tony is paraplegic, and Colleena is deaf – and they don’t let it interfere with their spirit and vision. Another shoutout goes to my friends Beth Allen and Shawn Smith, who are my bandmates in a Motörhead tribute band called Motördead CA. My relationship with playing music is sometimes complicated, after what feels like decades of unrequited love, but their enthusiasm for making this project happen drug me out of the trenches and back to the sheer joy of playing guitar. Beth is somebody I’ve known for over 20 years. We first met when she was living in San Francisco, and I was living in Philadelphia. Our bands The Loudmouths (Beth’s) and The 440s (my old band) would play together on tour. I moved to the Bay Area in 2007, and after Lemmy’s death (Motörhead) we talked about doing this tribute band. A few years later we both ended up in the CA desert and it came to fruition. One more mention goes out to my friend John Nikolai, who does brilliant cat rescue work in Downtown Los Angeles. He has what he dubs a “Disorganization” called Punks for Pussies, aka Lifelines for Felines, Inc. In August of 2019, he brought us a special cat named Thor who has given us so much joy. It feels so good to be a part of getting a cat off the streets and being able to provide comfort and shelter for a furry friend. John deserves much credit for his passion for the cause and the work that he does to back it up. It’s hard to stop, because there are so many people who do great work who impact my life in ways that they may not even be aware of. One such person is dark artist Chet Zar. Chet is someone I know casually through the art world. He is a pioneer in his quest to bring the Dark Art movement, which I feel my work fits into in some sort of way, into the public eye and to help establish its legitimacy as a genre. He does a weekly podcast where he interviews a different artist for every episode called the Dark Art Society Podcast, and everyone who supports the podcast on Patreon has access to a private group that is incredibly supportive and welcoming. I am grateful to Chet for creating this community that has given so much to so many.

Social impact: how does your business help the community or the world?

How do you think about work-life balance?

Where are you from and how did your background and upbringing impact who you are today?

What’s the right work-life balance for you?

Tell us about your brand’s social impact